Who Invented Soccer: The Origin and History of The Beautiful Game

Table of Contents
Early History Of  Soccer/Football
Soccer In England
The Emergence Of Association Football
Is It Soccer Or Football?
Laws of The Game
Worldwide Phenomenon
Final Thoughts

It’s an age-old sport that nearly 240 million people play around the world. In fact, many would argue it’s the oldest and most popular sport in the world being played today. Soccer has captured the hearts of millions around the globe.

Long known as football around the world and commonly soccer in America, the sport traces its history back thousands of years, but the rudimentary soccer played by our ancestors in those days, doesn’t resemble the modern sport we play today.

The question of who invented soccer is a complicated one. Although historical records indicate that some form of soccer was played nearly 2,000 years ago

in China, Greece, and parts of Central America, there is one country credited with what we identify as soccer today.

England is the first country to codify and identify soccer as the sport we recognize today.

In fact, the English introduced uniform rules, the penalty kicks in 1891 and other regulations such as touching the ball with hands and forbidding the tripping of opponents. Yet soccer has a complicated and intricate history the leads the question as to who actually invented the sport up for much debate.

The first appearance of soccer as a sport was in China. According to the International Federation Football Association or FIFA, the Chinese had invented a competitive game known as cuju that resembled our modern version of soccer.

The name cuju literally translate into “kick ball,” though by most historical accounts the game also contained heavy rugby influences as well. In fact, it wasn’t until the Han Dynasty (206 BC-220 AD) that any official rules were established for cuju.

Another version of soccer appeared in the Greek civilization a couple of decades later in 228 AD. Known as phaininda or episkyros, these Greek ball games were played with the hands and had enhanced level of violence.

In fact, many say these games resembled rugby, wrestling and volleyball more than they resembled modern-day soccer. Other games resembling soccer were played in Japan, Korean, and South America, but none come as close to soccer as we know it.

During the nineteenth century, the term “football,” was used to loosely describe a variety of sports games in which players primarily used their feet to move a ball towards an opponent’s goal.

Historians believe that during this time towns and villages in England were engrossed with kicking a pig’s bladder into an opponent’s goal.

However, things began to shift toward the end of the nineteenth century, and people wanted established guidelines between these various football games.

As fans of the sport began to gather and play, an anything goes mentality mean that these games would often become both violent and possibly deadly. 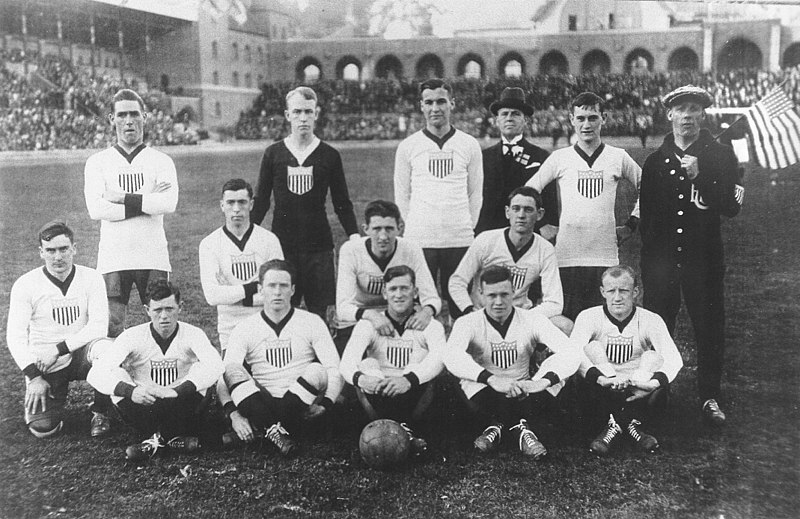 In 1845 published rules were administered for the Ruby School, which while similar to soccer, required a strict different set of rules and thus was classified as an entirely different sport.

The Emergence Of Association Football 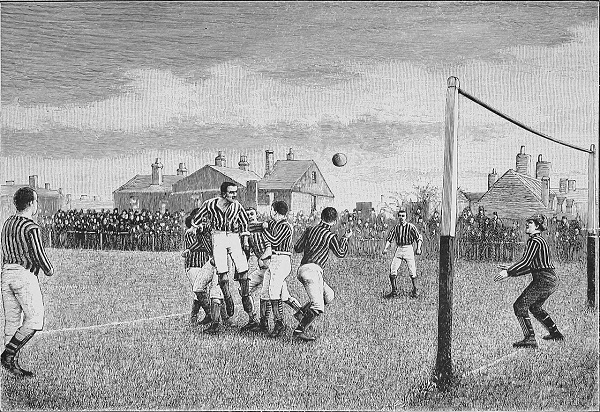 As various forms of soccer gained popularity throughout history, a need to find a standardized code for playing such an amazing sport began to arise.

Gone was the lawlessness of early soccer games, and slowly rules and regulations were being introduced.

As the country industrialized, space restraints meant players had to become more agile, and the early violence of soccer had to dissipate in order to have orderly games.

First written at Cambridge University in 1848, the Cambridge Rules became widely codified set of rules that influenced any other subsequent rule codes for football.

It was these set of rules that established ranks for both students and adult football players, and introduced the tripping opponents’ rule. However, these rules had yet to establish handling rules, and players were still allowed to use their hands similar to a rugby game.

Although this was an effort to standardize football rules, many schools and clubs did not widely adopt these rules which eventually contributed to the formation of The Football Association (FA) in 1863.

It is during this year that the Laws of the Game were codified by the FA, and are still a standard by which the sport is played worldwide. Indeed, it was also during this time that the name association football was coined in order to distinguish the sport from rugby football at the time.

Additionally, the world’s first official football league was started in Birmingham right at the heart of England.

Is It Soccer Or Football?

While the UK, England, and the majority of the world uses the term football to refer to the game of soccer, residents of the U.S. and Canada still commonly use the term soccer.

The reasons are not surprising. Soccer is derived from the abbreviation of association. During the time football rules were being codified adding the suffix –er was popular for students at the Rugby School and Oxford University.

Thus, the term soccer is simply a slang version of the term football association. It was also during this time period when the official rules of carrying the ball, shin-kicking and tripping were officially banned.

Laws of The Game

The Laws of the Game are what make soccer a distinct sport from other “football” games like rugby or kickball. Established by the English in 1863, the Laws of the Game resemble Victorian era football games, but are the direct ancestors of what we consider current soccer.

The laws consist of 17 individual laws, with each containing various rules and directions for playing soccer.

The laws are maintained and enforced by the International Football Association Board (IFAB) who meet annually to debate and discuss any changes that might need to take place.

All international matches and national matches are governed by these laws. The laws cover everything from the field of play to stipulations with the ball, players equipment, and duration of a match. The laws are an important element added to the sport of soccer that transformed the game from a lawless free-for-all into a respectable sport.

In fact, once the laws were integrated worldwide participation into soccer skyrocketed and teams were forming in other countries including Scotland, Denmark, the Netherlands, and Australia.

Although clearly soccer has been a popular sport throughout human history, no where else does its importance resonant in time than now. With the British’s establishment of official rules, it wasn’t long before the world over adopted those same rules to establish an international sport.

In 1904 the International Federation of Association Football (FIFA) was formed and the sport hasn’t been the same sense. Seven members were a part of the first official board including Denmark, France, the Netherlands, Switzerland, Spain, Sweden and Belgium.

It wasn’t long before the world’s first FIFA sponsored World Cup was underway in Uruguay in 1930. Today the World Cup is one of the most important sporting events worldwide.

The sport of soccer has come a long way through time. From its rudimentary origins in Chinese culture to its religious and symbolic impact on South American cultures it’s safe to say that soccer and other games similar to it are an important mark on human history.

But although many cultures have partaken in this phenomenal sport, there’s truly only one country who has taken it to the heights of popularity we see today.

England has been a phenomenal influence on the worldwide impact of soccer. From its violent and chaotic origins in which teams resembled mobs on English streets, to its polished current status as the most popular sport in the world, there’s no doubt the English were the one to invent modern-day soccer.

If it weren’t for the English innovation and ingenuity, perhaps soccer wouldn’t be as popular today. In fact, historians agree the sport might not have lasted because of it’s violent nature. It’s the English who brought this bloody and competitive game to heal and help create something the people the world over will love forever.